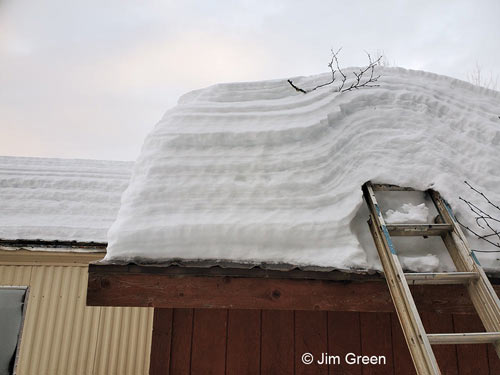 There has been a lot of snow this winter in many parts of Alaska. Here are some maps of snow depth from the Alaska River Forecast Center. Keep in mind many are from remote automated stations, some at high elevation.

Fairbanks and other parts of the interior were hit hard over the Christmas holiday with heavy snow (and even blowing snow) and then record rain, much of which froze into an anti-ballistic ice layer on everything [read AK Public Media story here]. Delta Junction was similarly impacted and suffered the collapse of their only grocery store’s roof. This graph shows the top ten 10-day snowfalls for any month or year for Fairbanks; this storm was extreme but not a record, for snowfall. The swings of cold/warm, heavy snow/freezing rain/rain were more extreme, but Jan 1937 had similar crazy swings and possibly freezing rain, as well as the top spot on this snow graph.

In northern Southeast Alaska, which gets quite a bit of snow most years, this year has been one of the heaviest so far. With a heavy dump of snow and then rain on Jan 9 & 10, on top of an already healthy snow pack such as pictured at the top, many were wondering if their house or commercial building could handle the load. Juneau and Yakutat have had some serious impacts from the weather including roof failures. This is not to say other towns have not. Now, after yet more rain and a subsequent break, another snow-rain episode is just making landfall. What will be the result for roof snow loads? We keep adding weight, but has there been much reduction in the load ie., from melting, while the temperatures were above freezing (for buildings that did not lose snow due to it sliding off)? I’m hoping my data and interpretation can help folks understand the problem and asses their own particular situation.

I’m also hoping anyone who can measure their snow load or relate their experience will share their info in the comment section. There’s a real scarcity of information on what the SWE/ground snow load is where people live. The maps from the Alaska River Forecast Center mostly show remote automated stations, many of those at higher elevation than most towns and cities, which is because they are concerned with river basin SWE. Even snowfall and snow depth data are sadly scarce now that automated airport stations (which can’t measure snow) are so heavily used, and the number of manned obs has shrunk. OK, back to the main topic…

The first thing to realize is that this is a complex question, and usually the most vexing questions have to do with the structure and strength of the building, rather than the weather. Unfortunately, it seems like many of our buildings were not built or maintained to handle the kind of loads that have been known about and experienced for many years. The current situation, while near the top of the list, is not off the list, so to speak. For advice about your building, you’ll need to find an expert in that arena. Now back to the weather…

The snow load, or amount of weight per unit area (ie., pounds per square foot — psf) is a function of the amount of water in the snow on the roof or ground. This can be measured by taking a core sample and calculating the load in whatever units you like. The international system would use kilopascals, but in the US psf is handy, since building codes use it, and it is intuitive if you already use feet and pounds in your everyday life. Another way to express it is in snow water equivalent, or SWE. This can refer to the liquid in the snow of a single storm, say (the same as “precipitation”), or more commonly in what is on the ground, ie the snowpack. Each inch of SWE pushes down with 5.2 psf of pressure.

I measured the snow load in Haines on Jan 8 on the ground, and on a low-slope, unheated shed roof (see photo above left). In the week following those core samples, we had of a bunch of snow followed by a fair amount of rain. Each situation is different, but when there is a decent snow layer on a roof, especially if it is dry, much of the subsequent rain soaks into the snow and therefore stays on the roof. But how much of it, exactly? Nothing about this is exact, but I do have some actual measurements, which is better than guessing, or saying “much” etc. I took core samples again on 19 Jan and compared the change in load with the potential maximum change based on 100% of the precipitation staying in the snowpack. Start with the bottom row of the table. There were 3.49 inches of precip since the Jan 8 samples, times 5.2 psf per inch would bring the ground snow load from 60.5 psf “measured” on Jan 8 to 78.7 psf “modeled” on Jan 19. But the measured amount on Jan 19 was only 71.5 psf, an increase of 60% of what it would have been had all the precipitation that fell stayed in the snowpack. Now the other 3 scenarios should make sense. Finally, the very last column relates the roof snow load to the ground snow load in these cases. The Jan 8 row shows what happened since the beginning of the snow year for Haines. It was a very cold, snowy period; almost no rain or melting (the TDD column shows thawing degree days, the number of degrees the average temperature is above 32F added up for each day). BTW this is not the usual weather in Southeast Alaska even in the colder inner channels.

So, yes, there is some relief for roofs when we get rain and/or warm temperatures, even with a lot of fresh snow to absorb the rain. More than I would have guessed. The Jan 8 ratios show that virtually all of the snow that fell since Nov 11 was still there. (Why is the ratio 1.06 for Jan 8 ground load?*) The next 11 days brought 21 inches of increasingly wet snow then more warmup with another 0.80 inches of rain. The actual increase in the loads was equivalent to 60% of the added precipitation for the ground snow load and only 30% for the roof snow load. This ratio would be even less for a heated building depending on how well insulated the roof structure is, so this may be most useful as a worst case scenario for other buildings in the area. Plus, the sample area is in a fairly cold, shady part of Haines.

Perhaps the easiest way to apply this information to your roof in Haines or somewhere with very similar weather (say, Skagway) is to measure or estimate the depth of the snow and multiply by the density I found (~33%) then multiply by 5.2 to get snow load in psf. Eg., 24 inches of snow on your roof at a similar density to what I measured would be 24*.33 or 7.9 inches * 5.2 gives you 41 psf. Of course this is an estimate. This post and its snow density chart may help for other situations. And things will change. As I write this, the next storm is layering on nice dry snow, but the southern half of Alaska is in for another warmup and heavier precipitation (much of it in the form of rain along/near the coast) later in the week. Snow loads will increase, but melting will help mitigate. This article perhaps gives a starting place to estimate the changes.

Wind: it can be friend of foe: It can blow off snow that would otherwise accumulate, but it can also drift the snow into an uneven loading situation with its own set of problems. Heat loss through a roof can similarly help by getting snow off the roof or hurt by creating icicles, ice dams which can lead to leaks and rot, and again uneven loading. Take another look at the photo of the Chilkat Center for the Arts in Haines, second from top of the post. Lots of issues for sure. But it’s still a useful and loved building for being a 100+ year old cannery building that was moved to its present location.

Note: if snow reliably slides off your roof, none of this holds, nor does it probably matter; if it slides regularly and completely (not staying in valleys), you can probably cross roof snow loads off your list of things to be concerned with.

How dense is snow? article from this blog

PS *Why is the ratio 1.06 for Jan 8 ground load? How can it be more than actually fell? Just a discrepancy between what the rain gauge caught and what accumulated at the core sites 10-30 meters away. Either the gauge undercaught, or the core site was getting extra from drifting, or, probably a little of both. But the discrepancy is likely small. Remember there’s nothing exact about any of this.