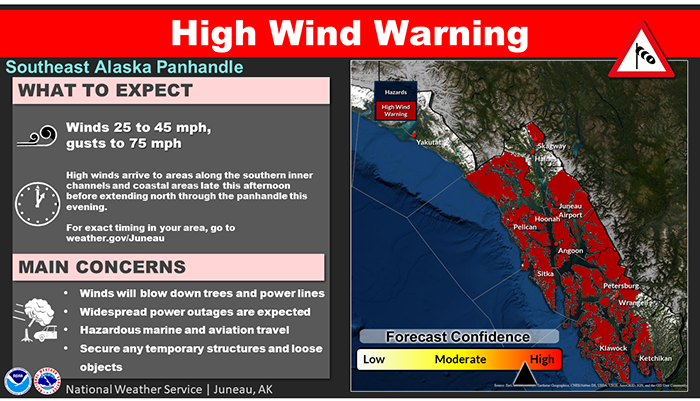 Southeast Alaska was hit hard Friday night, October 1st, 2021. High wind, heavy rain throughout, and, at quite a few locations, thunderstorms and even hail. Fortunately, in most places the worst was relatively short-lived. The storm was a potent one for the first of October. I’ll do the usual play-by-play and statistics, then examine a couple questions that might be on peoples minds: 1) Is this unusual? …How likely is it to get this strong of a storm this early in the fall? 2) Why would this sort of storm (with cool air) bring thunderstorms? …I thought they needed warm conditions.

The low pressure system responsible approached SE Alaska from the west-southwest, as most do, and was well predicted by the computer models for days ahead, and in turn the marine and public forecasts. The many warnings put out by the Juneau NWS forecast office were pretty much on the money as far as I could tell.

Here’s a surface analysis (hand drawn) followed by a short animated gif satellite loop showing the low near its most powerful late Friday:

The frontal cloud bands are wrapped around the low center about two and a half times! That’s indicative of a mature, strong low. Click on the looping image for larger still image.

Notes about buoy data. Ocean buoys are an incredibly important and consistent data source, but it’s good to know a couple details. First, there are a limited number of them out there, and sometimes the ones you most want to hear from are not reporting, or the data is not getting through. That was the case with buoy 46184 (see the map above for locations of the buoys I’m referencing). For this reason the worst conditions might not have been reported. Secondly, buoys tend to read a little conservative compared to other types of weather stations. It has to do with how long a period is averaged to get the wind speed: for buoys it is 8 minutes. This compares to 1-2 minutes for land stations. For gusts, it is 5-8 seconds for buoys, whereas land stations usually report “instantaneous” gust speeds. Seas reported are “significant wave heights” which is defined as “the average of the highest one-third of all of the wave heights during the 20-minute sampling period.” It is not the biggest waves by any means. In fact, the rule of thumb is you could get hit with a wave twice as high as the SWH, though it would be a rare one.

Here are some graphs from the 3 buoys I’ve labeled on the map above that data were available for.

On land, Sitka was closest to the low as it barrelled toward the coast before curving north. Sustained winds there were SE 25-35 mph (40-56 km/hr) with gusts over 50 mph (80 km/hr) ahead of the front, shifting to SW with similar strengths around 10 pm, a while after it passed. Then followed several thunderstorms at intervals into the day Saturday, at least one with hail. These are classic symptoms of a frontal passage. As this was an occluded front (more on that later) this is impressive…if it had still been a cold front it may have been even more dramatic. I like to look at Sitka’s weather since the wind shifts more readily due to fronts and other large scale patterns there compared to most other places in Southeast, since it is not so restricted by terrain.

Juneau airport had a peak gust of 69 mph (111 km/hr) around 10 pm and their highest sustained wind was 48 mph (77 km/hr). Later, after the front had gone through, post-frontal showers were vigorous here too. Besides heavy rain, showers can deploy outflow winds with dramatic effect. This is apparently what happened at Juneau airport when the wind, which had been gradually subsiding since Friday night’s max, and indeed had gone calm at 10:05 am Saturday morning, suddenly gusted to 48 mph (77 km/hr )at 10:15, then was calm again shortly after.

Juneau had many downed trees and power outages, as did several other towns including Ketchikan and Wrangell. It’s often worse for the first big storm because weak trees have been accumulating, plus the ground is often soft from heavy rain, and there are more leaves on the trees.

Ketchikan gets a funneling effect with this sort of storm which enabled the title of this post based on an anemometer on the roof of the FAA building at the airport. This instrument often reports the highest winds of any location during these storms and this time it did not disappoint, peaking out at 109 mph (175 km/hr) at 9 pm.

Rainfall was heavy with this storm over virtually the entire SE area, which of course is not that unusual for this time of year. There were periods of intense rain both as the front approached and in the post-frontal showers, but the duration was not long enough to top the charts for one or two day periods for most places. With the caveat that most coop stations (manned daily climate stations) are drawing from a limited historical period (so records are easier to set), this chart shows daily records set at many of them. The very large amounts at Pelican and Petersburg (which have longer histories) are quite impressive and blasted quite old records.

Looking at one-hour rainfall amounts might be more interesting this time, due to the shower activity. The peak 1-hour amounts were around a quarter of an inch (6.4 mm) at quite a few places from Metlakatla to Yakutat. Petersburg topped the list of ASOS/AWOS stations reporting 1-hr data with 0.35 inches (8.9 mm). Their decoded 5-minute observations around that time display some extremely wet and windy weather even by Alaska standards:

Note first that the observations run from bottom to top, chronologically. Then note the pressure bottoming out at 7:50 pm (pressure is given in the 3 black columns near the right edge. This is one way to note a frontal passage. Then at 8:30 the wind veered (shifted clockwise) and jumped in speed from 3 to 26 mph gusting to 45 in response to the front or a convective outflow wind, but the two were part of a package. The thunder with hail must have gotten everyone’s attention if the heavy rain and wind had not. The far right column is the precipitation for the hour or portion of the hour leading up to the hourly report at 56 minutes past each hour. The left-most 2-digit column is the temperature. Note only a modest cooling as the front passed; this was an occluded front rather than a basic cold front, meaning the warm sector had been squeezed aloft by the colder surface air, leaving less of a contrast at the surface.

Looking back at the surface map you can see that this low enveloped the entire state except for maybe the Aleutians. What was happening in other parts of the state? The low pulled plenty of cold air around its back side (west side) down over the state, resulting some combination of wind, cold rain, snow and subfreezing temperatures over the majority of the continental part of the state. King Salmon, which has seen lots of cold weather of late, had some rain, a bit of snow and wind chills in the low 20s F (around -5 C). Anchorage had a brief period of rain and some snow. It was the interior where the snow came in a serious way. Fairbanks set daily records Friday and Saturday with 3.0 and 2.8 inches (76, 71 cm) respectively, but most places south and east of Fairbanks got that much or more (8-12+ inches/25-30 cm) over the three days including lingering snow on Sunday.

Now, to the two questions I mentioned in the opening:

1) Is this unusual? …How likely is it to get this strong of a storm this early in the fall?

Bottom line: the depth and strength of the low was unusually strong for so early in the fall but but not unprecedented. For instance, seas at buoy 46084 were higher than 10 meters for over 6 hours. Looking at the climate graph for the buoy (on the left) show the max seas recorded in October to be under 10 meters. But note that the climatology only includes six years of data. The right hand graph indicates that the 40-45 knot sustained winds measured at that buoy in this year’s storm would be among the strongest recorded during that 2002-2008 period. (Graphs from NDBC)

Rainfall was high, but October is usually the wettest month in SE AK, and a good soaking does not depend on strong winds.

For comparison I dug up some brief facts about late September/early October storms of note over the last decade or so:

So the Oct 1-2, 2021 storm will go down in the record books as one of the strongest early season storms but along with plenty of others.

2) Why would this sort of storm (with cool air) bring thunderstorms? …I thought they needed warm conditions.

All thunderstorms require an unstable temperature profile in the troposphere (lower 6-8 miles of the atmosphere). It is the relative contrast of heat in that layer that determines stability–relatively warm air under relatively cool air is an unstable profile. Typical summer thunderstorms in Alaska start with a warmish atmosphere and further warm the lowest part (via sunshine) to cause instability. Cool season thunderstorms on Alaska’s southern coasts arise from cold air moving over warm water. Heat picked up from the water warms the lowest part of the atmosphere but not higher up, destabilizing the air. This scenario is actually more common than the first along the coast of SE AK. Check out these graphs of thunderstorm climatology by month for three SE stations, courtesy of Southeastern Alaska Thunderstorm Climatology, by Jefferson Wood, NWS, Juneau:

Notice that Yakutat strongly favors fall-early winter thunderstorms, like the ones I just described as dependent on cold air flowing over the ocean, Juneau has a preference for the early summer (sun warmth triggered kind), and Annette Island (Metlakatla) has some of each. This is in order of how close each place is to the outer coast vs inland. And look at the numbers. Does it surprise you that cloudy, cool, coastal Yakutat averages more than 3 thunderstorms a year; more than places like Anchorage.

This map of instability shows how the cold air being drawn around the low, after traveling across the relatively warm North Pacific arrives at Southeast Alaska in an unstable condition.

Thank you for reading. If you have any questions or comments, or stories from your own experience in this storm or others, I’d love to hear them in the comments.