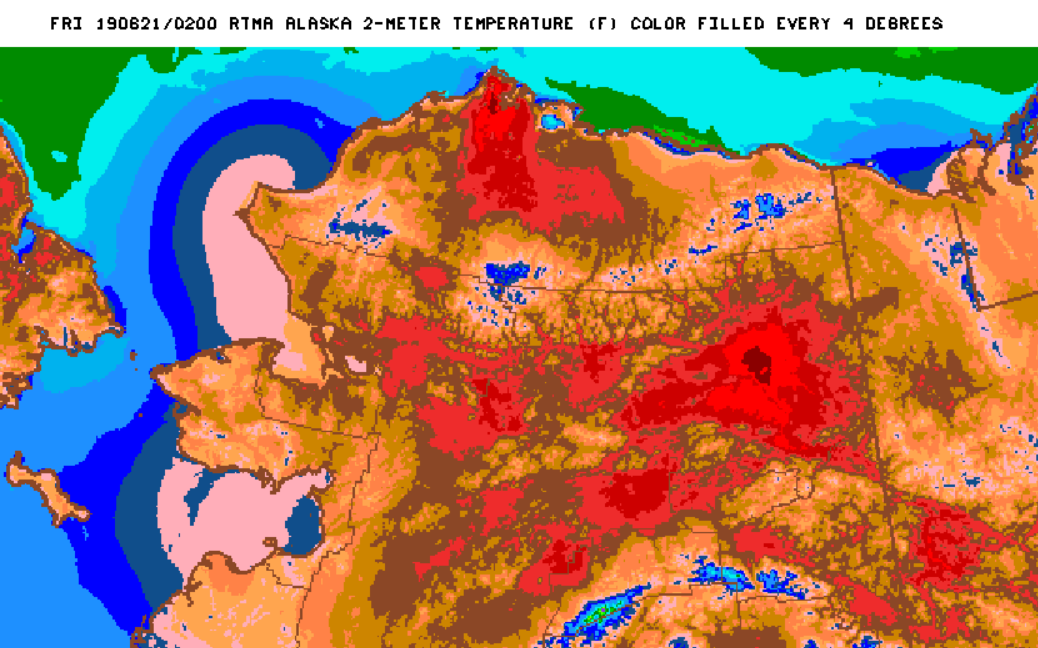 Thursday’s (6/20/19) high of 73F (23C) in Utqiagvik (Barrow) set a new all-June high temperature record for the station and exemplifies a phenomena I (and I’m sure others) call a coastal temperature spike, though the term has not made it into any meteorological glossaries that I know of. Highs were in the 30s F (~3C) a week ago in America’s northernmost city. More dramatic in my view is the 41F (23C) daily rise from the low Thursday morning of 32F (0C). Furthermore, the 73F high was warmer than Anchorage, Juneau, Ketchikan…pretty much the entire famously long coast of Alaska for the day! Kotzebue edged out Utqiagvik by a mere degree. Check out the Matterhorn-like spike in Utqiagvik’s temperature:

Besides Utqiagvik, the heat was felt around the northern half of the state, for the last few days at some locales. Here’s a map of highs on Thursday.

Here’s a more colorful depiction based on the GFS model for Thursday at 6pm (the high at Utqiagvik was closer to 7pm prevailing time, which you should understand is really a little before 5 pm local or sun time. These spikes often happen late in the day). Note the red shades on the North slope are similar to those in the interior.

Another notable temperature event was the low temperatures at Kotzebue over the last several days. Their highs, though in the 70s F (22-25C), are not the things of records, (plenty of June highs in the 80s there), but having overnight lows remain so warm is very uncommon.

In summer in Alaska, most important are local effects: The sun as the heat source and the ocean as the cold sink. Goings on aloft–the temperature, pressure winds etc., say a thousand meters (3,000 ft) and higher above the ground–are somewhat important but don’t swing the actual surface temperature as dramatically as the local, ground level forces. They often set the stage, however, as you’ll see was the case Thursday if you stick with me.

In the interior, sunshine warms the land and thence the air. If the skies are clear it will be warm during the day and cool off quite a bit at night. If dense cloud cover, it will be cool around the clock with a small diurnal temperature range–usually warmer at night than when clear.

On the coast the ocean dominates. Yes, the land absorbs sunlight but when it starts to warm, a sea breeze usually kicks in and keeps the immediate coast cool. There is usually weak low pressure in the interior during summer so the natural order of things defaults to a onshore wind. A temperature spike happens when the usual order is upset by a pressure pattern that forces an offshore wind at a particular location. Since Utqiagvok is on a narrow peninsula, most wind directions result in an onshore wind and these spike are rare. Other locations along a straight coastline, like Nome, or in a bay, like Unalakleet get offshore summer winds more easily. By the way, the current low percentage of ice on the water near Utqiagvik, and the warmer than usual temperature of that water certainly can and does affect high and, more so, low temperatures overall when the wind is calm or onshore, but the situation Thursday was all about moving interior warmth to the coast and displacing that cool marine air. The temperature of the water is not relevant in this kind of situation.

Let’s look at a few specifics that aided this Utqiagvik record high.

The upper air dynamics that I downplayed above as being of secondary importance often are the supporting actors that turn a run-of-the mill warm spike into a record. Let’s start with the 500 mb map which shows the pressure patterns at around 18-19,000 ft (5-6 km) (not sure where all the wind barbs went, but it’s actually easier to see). A ridge/high (see the blue H in the eastern interior) provided a warm atmosphere to start with, and clear skies to allow the sun to do it’s work. This was the case for 2/3 of the state, yet most places were in a normal range of temperatures for the day before the solstice. What was different up top?

Low level, here’s a chart of sea level pressure and 850 mb (around 5000ft/1.5 km) temperatures. The red lines are the 850 mb temperatures (a level low enough to impact surface temperatures). There’s a small max marked 15C (59F) over the AL/CAN border, then the next ring out is 12F (54F) (not marked). Note the tongue of this warm air jutting right up to the point Barrow area. The black lines of sea level pressure show a more subtle pattern, but the high pressure over NW Canada and a weak trough/low extending from the interior to the Chukchi Sea set up a southeast wind at Utqiagvik long enough to move that warm air off the north slope and right over the low peninsula that typically is the coldest place in the US from spring through fall.

Looking at the vertical profile from the morning balloon soundings at Utqiagvik shows very warm air lurking above a very shallow but strong inversion. (This inversion looks like a mid-winter sounding from Fairbanks only 30-40 degrees warmer!) The 00z (4pm) sounding below show that the inversion has weakened, and even warmer air has pushed in on its way to banishing the cold surface air. Click for larger versions.

Finally, here are the actual observations from Utqiagvik, reading from bottom to top chronologically. Note the wind direction in relation to the temperature. When the wind started coming from the SE Thursday morning the temperature took off. After hitting the peak at about 6:45 pm ADT it cooled off suddenly when the wind shifted to the N, losing 7F (4C) degrees in 5 minutes or less. Today (6/21) the air above the station is actually warmer than Thursday, and the overnight low is 10F or so (5-6C) warmer than Thursday, but the temperature so far topped out in the morning at 56F (13C) and is falling as I write this, with a wind from the NW, off the ocean.

Thanks for reading and I welcome any feedback or questions. Here are a couple other blog posts that cover the temperature spike, sea breeze, etc: https://www.williwaw.com/2014-05-30/sea-breezes-an-alaskan-spring-summer-staple/