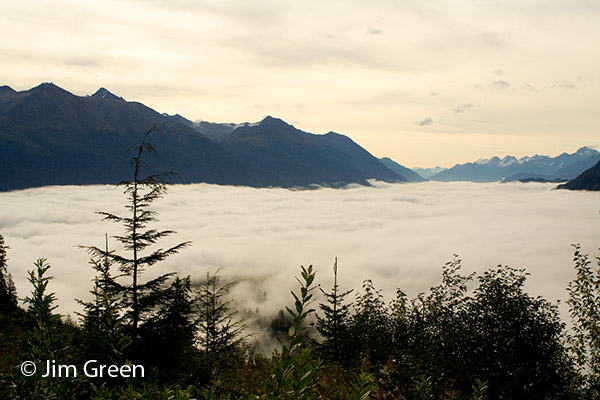 If you think fog is a simple thing then this post may complicate things, but hopefully in an interesting way. If you get confused by the various terms used in media and on websites and phone apps for various types of fog, [fog, mist, freezing fog, ice fog, etc], then maybe I can “clear” things up a little.

Much of the weather terminology in popular use has come to us via the code used to report weather at airports, the METAR code. Reliable and up-to-the-minute weather observations are important for aircraft operations so that’s where the vast majority of hourly and sub-hourly reports come from. When you see an “official” report of the weather in say, Glennallen, or Juneau, it’s a pretty safe bet it is from their respective airports (Gulkana, code PAGK, and Juneau International, PAJN). When these airport METARs are decoded for public consumption some of the less common terminology comes along with it.

Here are two foggy weather observations in METAR code from Utqiagvik (Barrow) in April 2011. Below them I’ve translated them into the old SA code, partly to show how the code for fog has changed and partly to show how long I’ve been in the business (the METAR code was adopted in North America in 1996).

The main thing I want to point out is that what in the old days was plain old fog (F in the SA code), in the METAR could be “mist” (code BR), or “freezing fog” code (FZFG), which you can see in the examples above, or just “fog” (code FG) which is not in the above METARs.

Here’s a matrix of when each is used:

[OK, why BR? It comes from the french for “mist.” Did I mention these codes and abbreviations are written by an international committee?]

You can see how the term used for a single phenomenon, fog, can go through two name changes when the temperature or visibility changes. There is a reason for that…the METAR code tries to highlight issues of importance to aviation. One issue is the density of the fog… BR vs FG. Another issue is that dense fog below freezing, FZFG, can be a source of aircraft icing. (It can also be a source of roadway icing, a problem more pronounced in the lower 48 than in Alaska.) You can also see how a report of mist one hour followed by a report of freezing fog the next and back to mist the next might be confusing especially if it is due only to a small change in visibility.

So, even though METAR reports, and the automated weather stations that generate them, were developed for aviation use, their presence in most towns with an airport and their frequent 24/7/365 reporting make them valuable to a data-hungry, constantly-connected public. These reports are often, but not always, translated for public use using the names given by that international committee. So you may see reports of mist or freezing fog from one source, while some sources hearken back to when fog was just fog.

What about ice fog? Is it the same as freezing fog?

No. Fog stays liquid at temperatures way below freezing, as contradictory as that sounds. (0C/32F would be better called the melting point of water for this reason.) Most fog you run across at temperatures down to at least 25 or 30 degrees below zero F (~-33 C) will be liquid. The water droplets are supercooled and are just waiting for something to freeze onto. Commonly it’s trees and fences that get nice feathery hoarfrost crystals (via a complicated process in which the water goes back through the vapor phase on the way to becoming ice), but when conditions are right aircraft and roadways can get rime ice or clear ice, also called glaze.

Ice fog, on the other hand, is already frozen. It is tiny particles of ice usually forming around smoke, exhaust or other particulate matter, and so tends to form in inhabited places. The old code for ice fog was IF, but the METAR code strangely has no discrete code for ice fog…it lumps it in with freezing fog. However, it can’t freeze onto objects because it is already frozen. And even if there were liquid water present, at the very low temperatures involved it would be insignificant. However it is usually very dense, with visibility often below 1/4 mile, and can form quickly when water vapor is introduced by human activities, so it is a hazard all its own.

So here’s a recap of definitions. These are my words except where indicated.

A mass of water droplets suspended in air dense enough to hamper visibility and with the bottom of such mass at ground level. If it were above the surface it would be a cloud.

Fog composed of supercooled water droplets, having the potential to freeze on contact with solid objects to form a coating of rime and/or glaze ice. Icing is most likely at relatively warm temperatures, 0 to -10 or -15C (32 to 14 or 5F). More commonly in Alaska, supercooled fog provides vapor for hoarfrost formation, a different process.

I’ve already defined this in my words above, so I’m including this excellent definition from the International Cloud Atlas

A suspension of numerous minute ice particles in the air, reducing the visibility at the Earth’s surface.

Ice fog forms when water vapour, mainly resulting from human activities, is introduced into the atmosphere. This vapour condenses, forming droplets that freeze rapidly into ice particles that have no well-defined crystalline form. It is observed at high latitudes, usually in clear, calm weather when the temperature is below −30 °C.

Horizontal visibility is usually very restricted in ice fog, often to less than 50 m. This is due to the small diameter of the ice particles, typically 2−30 μm with the smaller particles forming when the temperature is between −40 °C and −50 °C.

Ice fog does not produce halo phenomena, although such phenomena may be present if the fog also contains diamond dust.

Now look at these definitions from the Federal Meteorological Handbook #1, the official rule book of weather observing for US government agencies:

“freezing fog: A suspension of numerous minute ice crystals in the air, or water droplets at temperatures below 0° Celsius, based at the Earth’s surface, which reduces horizontal visibility,” and “ice fog: See freezing fog.”

This is clearly not in line with any other accepted definitions. The part about ice crystals has been inserted, I believe, to make up for the fact that the METAR committee did not recognize ice fog in their code. When it comes to precipitation, there have always been, and still are, definitions for liquid, freezing, and frozen states, with freezing meaning supercooled liquid precipitation that freezes on contact with the earth or other solid object. When the freezing designation was applied to fog, it seems illogical to include both supercooled liquid fog — which, like rain or drizzle in that condition, can freeze on contact — and ice crystals, which can’t. In fact there is already a separate code for ice crystals. (The stated difference is that ice crystals in fog are suspended while ice crystals one would code as IC are falling, and therefore technically precipitation.)

Bottom line: if you see FZFG in a report and the temperature is colder than roughly minus 30 (F or C), realize that a) it is unlikely to cause any significant icing, and, b) it is most likely ice fog, especially if the visibility is very low, say under one mile. Today’s automated stations probably can’t tell ice fog from regular fog, so maybe that’s why the people writing the METAR code chose to not deal with it. Maybe this will change with newer technology.

Final irony: The thorough, scientific summary of ice fog provided above by the International Cloud Atlas comes from the same parent organization, the World Meteorological Organization (WMO) that left it out of the METAR code and covered the omission with some pretty unscientific compromises.

Questions? Comments? Counter arguments? Please let me know via the comments form below.