It’s been a cold winter across most of Alaska. It’s not the first and it won’t be the last. During every winter there are relatively colder and warmer periods. This year these cold snaps and warm spells seem to be aligned pretty well to the calendar months: November was cold, December warm, and January…one of the coldest, especially for the rail belt and everywhere west. Check out the write-ups from Weather Service personnel in Anchorage http://pafc.arh.noaa.gov/papers/THE%20COLD%20FACTS.pdf and Fairbanks https://nwschat.weather.gov/p.php?pid=201202012052-PAFG-NOAK49-PNSAFG. February is staring off with a big warm-up, thanks to a strong low barreling into Alaska’s midsection like a gut punch. I’m not making any promise that this trend will hold for February. It does look like a week to 10 days’ break for from the cold, but beyond that, I’d be surprised if we don’t get a fair amount of more cold weather (and snow for the coastal and near coastal areas) before the winter is over. See the Climate Prediction Center for more. For this post, however, I want to zero in on an interesting pattern that seems evident during the worst of the cold snaps. Let’s start with this map, used by permission of the Anchorage Daily News. 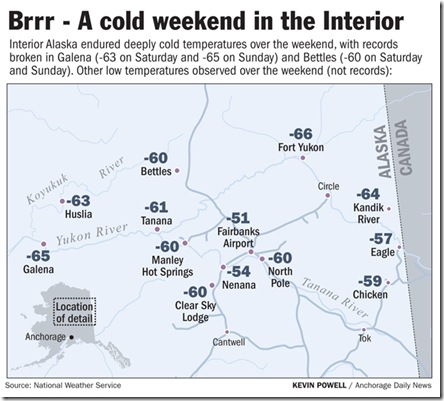 The figures show the coldest temperature (degrees F) endured at each city over this past weekend (28-29 Jan). The pattern that jumped out at me is the “warm” Fairbanks surrounded by a bunch of colder towns and villages. Now, I’m not about to make any conclusions based on this one case, but stay with me and I think I can make some sense of this, at least to whet the appetite for further study. About the map–you might point out the Nenana was not much colder than Fairbanks, and after all, some places are just colder than others. To check that idea, I’ve tabulated the long term averages for the stations on the map (some did not have enough data, so I’ve added Hughes to stand in for Huslia, and I also added McGrath for reasons which will become apparent). 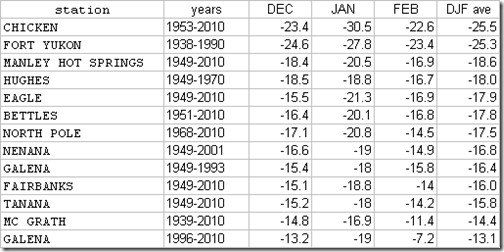 The stations are arranged with the coldest average at the top. There is not a lot of correlation between the average temperature in the coldest part of the winter (the table) and the Jan 28-29 cold snap minimums (the map). Fairbanks is only a little warmer than Nenana on this chart, based on WRCC period of record data, but is slightly colder according to the NCDC’s latest (1981-2010) normals. This apparent inconsistency is probably due to the many holes in Nenana’s temperature record, and shows how careful one must be when working with climate data. Anyway, the map is more of a conversation starter than anything. We need more data. Complete, reliable weather records going back far enough to see long term trends are quite hard to come by in Alaska. The best data for this little investigation is a comparison between Fairbanks and McGrath. McGrath is a ways from Fairbanks, about 275 miles (440 km) actually, but for this purpose, having complete, quality data was paramount. There are stations much closer geographically but with less complete and in some cases less reliable data. Those stations also support what I’m trying to say about Fairbanks cold snaps. Click here to see them. What am I trying to say? This graph of the two 1st order stations says it:

The columns on this graph show the number of days during the given winter that the temperature dropped to –50 F (-45.5 C) or colder, red for Fairbanks, blue for McGrath. The jerky lines above are temperature observations for each station (same colors), showing the average of daily lows for December, January and February for the given winter (December of the year previous to the label). The average lows track as you would expect: each of the two stations follow the ups and downs of the 70 winters in fairly close agreement to each other, or with Fairbanks being a few degrees cooler. The number of –50 or colder days is fairly close as well, through about 1971. In fact up till then Fairbanks has more of the super cold days than McGrath, but that’s nothing unusual since Fairbanks is colder on average–the line graph clearly shows that–and in the winters that Fairbanks had significantly more –50 days (1965 & 1969) their DJF average was significantly lower as well. What begs an explanation is the lack of –50 days after 1971. There is no change in the relative DJF temperatures (almost all the –50 days occur during those three months). Yet from 1971 onward, McGrath has had many more 50 below days than Fairbanks, even while their average temperatures have been very close to or a bit warmer than Fairbanks. In fact, the rate of occurrence of days 50 below or colder does not change much for McGrath or the 4 other interior stations you can see in the supplemental file, but at Fairbanks it drops by 4/5ths!

I think we are dealing with an interesting variation of the Urban Heat Island effect. The UHI effect is the well-known and well-documented rise in temperature of a large urban area as compared to surrounding non-urban areas. In more temperate areas the UHI is only significant for large urban areas, and has mostly to due with radiational effects due to changes in the nature of the land surface. In Alaska we don’t have the kind of urban-ness needed for a significant UHI effect based on the mechanism just mentioned. Even Anchorage, as large as it is, has so many trees, and indeed large blocks of natural forest areas within the city as to mitigate those effects. Apart from Anchorage, no city has the size that would create a significant UHI in the lower 48. But we do things differently in Alaska, as the saying goes. Radiational effects may be small, but emissions of sensible heat, and especially water vapor and particulate matter are what I believe create UHIs in Alaska. Winter low temperatures show a much stronger effect. Even then, the UHI effect for Fairbanks appears to be fairly weak. If it were strong, my graph above might show some divergent trend over the years of population growth of Fairbanks vs McGrath (see graph below), but it sure doesn’t. A study at UAF (Magee, et. al. 1999) looking for a possible UHI for Fairbanks found about a 1°C (1.8°F) warming of winter lows compared to nearby Eielson AFB. It’s just one study of climate records, which as mentioned above, are not always as complete or precise enough to draw too many conclusions. (An actual field experiment in Barrow found a much larger UHI effect, surprising to me given that Barrow is not only much smaller, but also much windier. Winds tend to homogenize the air and wipe out small scale temperature differences. click here to read the study.)

This last item is crucial, but might need some more explanation. When carbon based fuels are burned, the primary byproducts are carbon dioxide and water vapor. There is a lot of energy in water vapor, a potential kind of energy called latent heat. This is an important lesson in Meteorology 101. The latent heat is put there by the sun when it evaporates water, or, in this case, by the heat of combustion. There is very little water vapor in the frigid winter air of uninhabited interior Alaska (almost none) since there is so little heat available to convert or keep the H2O in vapor form. Of course there is very little liquid water to be found lying around either, for the same reason…not enough heat to keep molecules moving enough to stay liquid. But in a city the size of Fairbanks, with water vapor flowing out of every smoke stack, power plant, furnace flue, exhaust pipe and jet engine, there is quite a bit, and it does not want to stay gaseous long. At moderately cold temperatures (+10F down to around 25 or 30 below 0F)  it often makes liquid water fog, which often gets mixed into drier air and turns back to vapor, or become rime or frost on solid objects. Sometimes, if the right kind of particulates are at hand, (remember how burning fossil fuels releases particulates: smoke, etc.) it can form ice crystals in the air which gives us those brilliant halo and sun dog displays. All these instances of water changing to a lower energy state release heat. And when fog or clouds are formed, the fog or clouds can also retard heat loss due to radiational cooling of the ground. But often it keeps getting colder despite these effects.

So, the colder it gets, the more moisture is put into the air by humans trying to keep warm or keep their vehicle or aircraft engines running, but the less moisture the air can keep in vapor form. Around –40 (F or C) and colder the liquid and gas phases are basically no longer available to H2O. It’s getting squeezed out of the air as fast as it can be put in, and the result is usually ice fog. And lots of latent heat, since there are two phase changes to get to the solid ice particles that make up ice fog. So let’s look at the recent cold snap and see the difference in moisture issues between Fairbanks and much smaller, but usually warmer, McGrath. Last graph, I promise.

Look especially at the temperature changes. In Fairbanks, when it dropped below about –45 F, the visibility dropped to 1/2 mile, then 1/4 mile or less…ice fog. With the fog thick and constant for the next day and a half, the temperature did not get much colder—nor warmer. In McGrath, the visibility only dropped for short periods and not as drastically as Fairbanks, despite even colder temperatures at the low end. There was less water vapor being put into the air, less fog, and less latent heat release and less to hinder radiational cooling. During the afternoons, the lack of fog allowed some warming due to a little sunlight, though on the 29th it looks like the warming was due to other reasons.

If your fingers and keyboard are not too stiff from the cold, type in your comments or questions below. I’d love to hear your thoughts.