The 500 mb (millibar) weather map has traditionally been the bread and butter of weather forecasters. Today, with so many new, high tech tools at their fingertips, is this map still relevant? You bet! The 500 mb level of the atmosphere is simply the height at which the air pressure is 500 mb (or 50 Kilopascals (KPa) if you want to be a metric purist). Since this height varies from place to place, the 500 mb level is really an undulating surface, perhaps resembling the swells on the sea, if you could see it. Map it out and you have a contour map, very similar to a topo map you might take hiking. Here’s the forecast 500 mb map for Alaska and surrounding oceans valid 4 am Sunday: 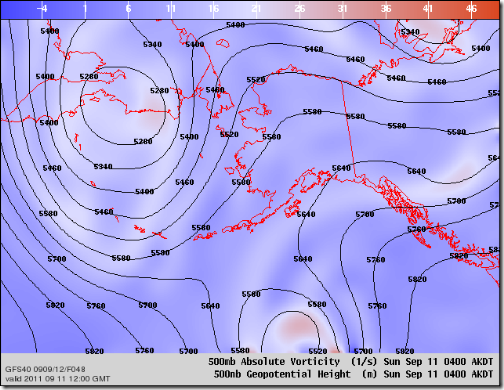 At the surface of the earth the pressure is around 1000 mb (or one bar, or atmosphere), so the 500 mb level is about 1/2 way up the atmosphere in terms of pressure or mass. in other words, half the air is below 500 mb and half is above. The actual height is another story. Air pressure does not decrease steadily as you go up in the atmosphere, it decreases logarithmically…the decrease in pressure happen quickly at first then gradually slows. The 500 mb level is  roughly 5,500 meters up (18,000 ft). The contour lines are labeled as to their individual heights.

What does this map tell us?

In general a 500 mb chart, or any upper level chart, shows the pressure pattern, and the wind flow for the valid time, whether that be the time of the actual measurements for a diagnostic chart, or the time of the forecast for a prognostic chart (prog for short). More interesting is what this upper level flow means for the weather down here on terra firma. But first a little more info way up high. The map above does not explicitly show the winds, but they can be deduced from the contours. Upper level winds flow pretty much parallel to the contours, counter-clockwise (northern hemisphere) around lows–an area of low heights on upper level charts being the same thing as an area of low pressure, for all practical purposes. The wind speed is proportional to how close together the contour lines are. In this map there are two lows, one big one in the upper left in the far western Bering Sea, and a smaller one half off the bottom of the frame. If you connected these two with a line, you’d be describing the axis of a larger, more general feature, a trough. To the east, or downstream in the wind flow, the contours bend up (north) then curve back south to describe a ridge. The strongest winds are around the west and south sides of the larger low, over the Kamchatka Peninsula and south of the Aleutian Islands, whereas the Alaska Peninsula is in a slower wind area, for instance.

What does it tell us about our weather?

Unless you are up in an airplane, where you will rely on upper air charts directly, what these maps mean for surface weather is of primary interest. The 500 mb chart is good for showing where surface lows and highs will develop and where and how fast they will move. Pretty useful, I’d say. Here’s the super condensed version of how this works: The area from a trough axis downstream to the following ridge is an area favoring development of low pressure centers and fronts at the surface. The area under and downstream from a ridge is an area favoring high pressure at the surface. Remember, entire books are devoted to this interconnection of the upper and lower layers of swirling air, the dynamics of the atmosphere, so what I’ve just let on could be the mother of all simplifications. Many 500 mb charts, this one included, show an additional parameter in an effort to reveal the dynamical processes at work. It is the vorticity field, and for now lets just say the higher vorticity values (shown in the color scheme as tending toward red), are where the dynamics are more favorable for low pressure development at the surface. This is also a big oversimplification, but I wanted to mention it since it is on the chart. Take a look at the 500 mb chart above and see if you can envision the areas where surface lows and highs might want to be, then look at the computer’s vision on the surface prog for the same time, from the same model: 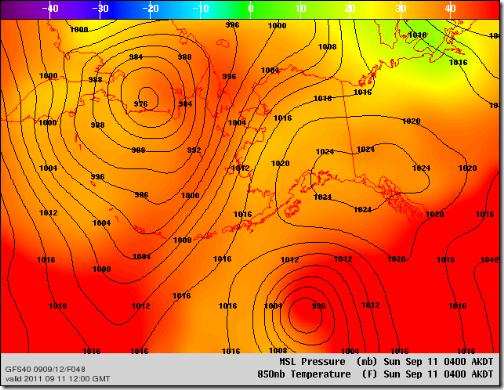 The serious action at the surface is in the eastern Bering sea under and a little downstream (east) of the 500 mb tough and low. The smaller low at 500 mb (the one near the bottom of the map) also has a surface low counterpart a little downstream. But now look at the 500 mb ridge which has its axis a ways offshore of Southeast Alaska and continuing northwest through roughly Prince William Sound and the northwest arctic coast. On the surface there is high pressure a ways downstream from it, centered over Yakutat at the neck of the panhandle. There’s dynamics at work.

What does it all have to do with the Northern Lights?

Actually, the atmospheric patterns aloft or at the surface have nothing to do with the aurora (or northern lights). But they have everything to do with whether you will be able to see the potentially strong aurora likely to be happening over the next couple of days at the very upper edge of the atmosphere, roughly 30 times higher than the 500 mb level. The 500 mb ridge is nicely situated to give Southeast Alaska the best look at any auroral activity. The southcentral region may get some breaks, but it is not as well situated as the panhandle, were the offshore flow should make for talk-of-the-town good weather. The eastern interior, which has had its share of nice weather recently and is drier by nature won’t even do as well as the panhandle, as the high will probably not be strong enough to clear things up completely. For the panhandle, Sunday should be the best day, for the other areas, not so much difference between Saturday and Sunday. The western half of the state. on the other hand, things will be gong downhill fast as the dynamics of an upper trough come into play. Lots of moisture and even more wind are headed for the west coast and the Aleutian chain. The NWS has high surf advisories out already for many west coast areas.

You can check for yourself, not only the 500 mb chart, but all the levels, plus the latest info on solar activity that might spark a good aurora. Here are some links:

Please let me know if you see the aurora, a coastal storm, or something in between. Use the comments link below for your report or any questions or comments you might have.

2 thoughts on “The 500 mb pattern and the northern lights”