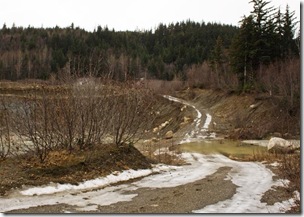 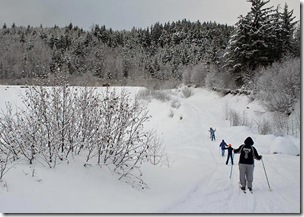 Well, I took the photo on the left this afternoon, and the one on the right exactly one year ago, from the same spot. So that should tell you how the snow lovers are sounding around here.

Where is the snow (in Alaska)?

Plenty of snow in the Midwest and eastern US, but how about up here where it is supposed to be? For much of Alaska it’s right there under your skis. For us panhandlers it’s up in the mountains. Here’s the Feb 4 map from the River Forecast Center in Anchorage. (there’s a link at the end of the article that will get you the latest, zoomable, interactive map). 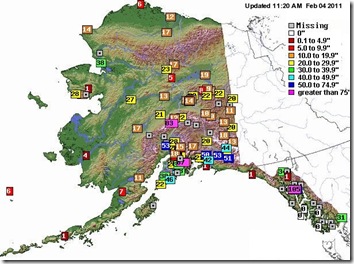 Except for Southeast Alaska, snow depths, and ski conditions are decent. In Southeast, our rain is of course snow in the mountains. Lack of sea-level snow might even suggest more snow up high. This is because the lack of snow is often due not to dry weather but plenty of storms with a southerly trajectory, which means warm and wet. This means plenty of snow above the snow level* and rain below. This seems to be the case recently. Although there is currently little or no snow at low level locations throughout the panhandle, at elevation things are more typical for February. These higher elevations sites are shown on this map and often right next to low elevation stations, so you need to look carefully. For instance, it shows no snow on the ground at the Juneau low level sites, but right nearby there are 3 reports ranging from 30 to 105 inches. These are at Eaglecrest ski area and range in elevation from 1200 to 2600 ft. There are two other reports that stand out on the map, at the north and south ends of the panhandle with 34 and 31 inches. Both can credit their snowiness primarily to being tucked way up long valleys or fjords, closer to the cold interior than the warm coast.

Is there more snow coming?

Don’t count out Southeast Alaska for sea level snow this winter. There are still a couple months left and things can change. Speaking of change, in 2010, after the nice snowy right hand photo above was taken, we had a few days of 40+ weather with copious rain, so change goes both ways around here. The computer models are indicating a continuation of active, fast moving storms, and with a bit of a cooler trajectory, which may be enough to get a least parts of Southeast Alaska into positive snow talk territory again.

*I’ll go into the snow level in a future blog. Stay tuned, and let me know your thoughts and questions on this post or at least how the skiing is where you live.