When tourists see my Alaska Weather Calendar a certain percentage chuckle and ask “is is accurate?” What they’re assuming is that I’m forecasting the weather for the entire next year (almost a two year forecast since I print the calendars the spring previous to the calendar year). They liken it to the Old Farmer’s Almanac.

It is hard enough to predict the weather three days in advance and usually fruitless to make a specific forecast for seven days out. So am I going way out on a limb in taking a stab at the coming winter? Will I be like the cartoon characters who cut off the limb while standing on it?

Well, first it is important to note that a seasonal forecast differs from the 3-7 day variety that is commonly exchanged over morning coffee and ridiculed at lunch (sometimes for good reason, sometimes due to a misinterpretation). The difference is the level of time-specific detail required in the short term forecast (which is usually more than the science can support after about day three or four.) So we’re dealing in general statements about a long period of time, usually with a low confidence factor assigned. These are routinely made by the Climate Prediction Center and here are the temperature and precipitation outlooks for December through February (as usual, click on image for larger version):

Most of Alaska is predicted to be below normal in temperate, but the precipitation forecast calls for “equal chances” of above or below normal, which to say there is not enough certainty to say one way or the other. Note that there is no snow forecast…since snow depends on precipitation and temperature, the variables are too tricky. I’ll take a shot later, after a little on what might help one in this situation. Also note that the forecast only goes through February, which even southerners know does not nearly cover winter in Alaska.

I’m not sure about all that goes into these particular forecasts, but one thing is sure: long range forecasting has benefited in recent years from understanding links between the weather and semi-regular cycles in the ocean-atmosphere system. Benefited does not mean perfected. There is still plenty of uncertainly. But let’s review what is fairly common knowledge:

The southern oscillation is measured as temperature and wind patterns in the tropical Pacific, but when these elements flop back and forth (or somewhere in the middle) there are connections to the weather over a far wider area, perhaps half the globe.  Here’s an easy-to-read graph showing the cycles from 1950 to 2010. When the graph is far up in the red the ENSO is in the warm phase or El Nino. Significant dips into the blue are La Nina Periods.

During El Nino winters, Most of Alaska is warmer and often wetter. Strong jets of warm air from way south in the Pacific visit more often, bringing episodes of above-freezing temperatures and rain, even in the midst of the winter.  [As I write this Anchorage, Fairbanks and most points between and even further north are just getting through a terrible freezing rain event that would seem more consistent with an El Nino instead of the strong La Nina we seem to be headlong into. This reinforces that there are no absolutes, only generalizations.] La Nina generally means colder winters, often drier. For northern areas such as Fairbanks and north, a cold winter pretty much equates with less precipitation including less snow. For Southeast Alaska, colder usually also correlates with less precipitation, but because SE gets a more even mix of rain and snow in the winter, and a colder winter shifts more of the precipitation to snow. Its not hard to get more snow out of less precipitation; remember an inch of precipitation means an inch if it’s rain but 10-30 inches if it’s snow. As I mentioned in passing, the ENSO is shifting decidedly negative, so a moderate to strong La Nina is expected through the winter. You can read more about it at the Climate Prediction Center.

Since the ENSO cycle was discovered many years ago, many more ocean-climate cycles have come to light, including an important one for Alaska, the PDO.  The PDO also is keyed to Pacific Ocean temperatures, but over a much larger tropical and extra-tropical area. The time scale is also different. It tends to switch phases roughly every  20-30 years, rather than 1-3 for the ENSO. However, the two are related, not surprisingly. After all they both have to do with Pacific sea surface temperatures.

Take another look at the above graph of the ENSO. Near the middle, in about 1977, there is a undeniable shift from more cool cycles to more warm cycles. This marks the change of the PDO from cold to warm, and was so profound that it has been called the The Great Pacific Climate Shift. This table from the Climate Diagnostics Center clearly show the most recent PDO shifts and relates them to the ENSO: 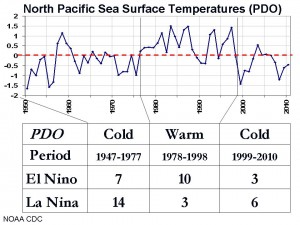 And this graph from the Alaska Climate Research Center at UAF shows the dramatic effect on Alaska’s temperatures: 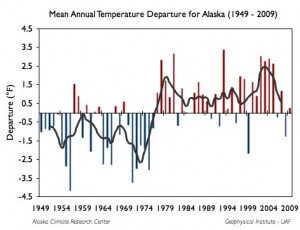 This graph is nothing short of stunning from a climate statistic standpoint. After 1977 there is only the one big stalactite into below-average temperatures (in 1999), and that correlates to a slip of both the ENSO and PDO into the cool phase.  Hold that thought about the cool 2008.

It’s not too surprising that a warmer Pacific means a warmer Alaska and vice-versa. But what forecasting value does it have? Much. First, the sea changes much more slowly than the weather patterns, so the current state of the ocean can help project weather regimes and averages much further foreword than traditional weather forecast techniques and technology. Please remember the difference between “weather regimes and averages” and a “traditional weather forecast” as discussed in the third paragraph of this post. So let’s look ahead.

For this winter, confidently going to be an La Nina winter and likely a strong one, I’m agreeing with pretty much everybody in expecting colder than average for most of AK, more snow in Southeast Alaska, possibly more snow in Southcentral.

Additionally I’m going to stick my neck out a little and forecast a similar pattern most years for the next 20ish years. It’s no special revelation. The latest pacific regime change, back to a cooler Alaska, has most likely already happened, although it may not be as large a change as the 1977 jump, or as sudden. The CDC table above puts it happening in 1999. But this is not totally convincing, especially looking at Alaska, so maybe it was closer to 2005. Time will clarify. So my forecast is merely for a continuation of the current regime for a period of time consistent with past regimes. Not too bold, really. But even if it holds, there is bound to be year-to-year variability. Here’s the power in this: If there was confidence that for the next 20 years in SE AK, colder, snowier winters were to be twice as common as warmer, rainier ones, (a change from the past 25-30 years when warm ones bested cold ones 3:1) then planning decisions by individuals, governments and other organizations become easier. Should people winterize their homes? Yes. Should municipalities upgrade their snow removal departments? If it has been discussed, then it might be time. Should the State Park people in Haines invest in ski trail grooming equipment as they are currently planning? I’d say go for it. [bias disclaimer: I’m an avid cross country skier]

I’d love to hear any comments, questions or complaints from skiers and non-skiers alike. Use the comment link below.

2 thoughts on “What Do(es) the Coming Winter(s) Have in Store for Alaska?”