By the time we get to June, we expect the weather to settle down a bit…even here in Alaska. But weather would be boring if it were not for a few surprises now and then. Skagway was sucker-punched this day with a sharp front featuring wind gusts up to 52 mph (22 m/s) and a quick temperature drop of 15F (8C). Check out the loop made from the FAA’s wx cam at the Skagway airport. You can see the large plume of dust kicked up by the wind:

This gusty south winds impacted more than Skagway. Somewhat gusty wind shifts could be tracked up the panhandle. At Eldred Rock, about 35 miles south of Skagway in the highly channeled northern Lynn Canal, winds switched to south at 37 kts with gusts of 51 kts (43 & 59 mph or 18 & 25 m/s) about an hour before Skagway. Haines got hit with less ferocity, but still enough to get everyone’s attention and kick up a bunch of dust and pollen. Here’s a shot of the pollen being whipped up and blown right up and over the 2000+ ft (600+ m) shoulder of Mt Ripinski in Haines:

Skagway, if you’ve never been there, sits in a narrow valley extending off Taiya Inlet—the northern end of Lynn Canal (a fjord, not a man made canal). The wind sweeps through the town proper with pretty much the same strength as it does at the closely adjacent airport (where the weather station is). So we can say the airport ASOS (automated wx station) is quite representative of the town, something that cannot be said for many cities. This day, Skagwegians and thousands of visitors off the 4 large cruise ships in port were no doubt enjoying the 77F (25C) warmth and light winds at 1pm. Yes, the north winds had been blowing–up till a couple hours earlier–around 15 mph (7 m/s), which, incidentally,  is why the temperature had risen so quickly.

The switch to a cooler south wind in the afternoon is actually fairly common here, but the surprise was the magnitude of the contrast. Check out the progression from the hourly reports:

The report times are in local time (ADT), so this covers 9am to 9pm inclusive. The switch to a south wind and the drop in temperature happened between 1 and 2pm. But, again, locals would recognize that as the sea breeze kicking in. But a couple hours later the wind doubled, with a peak gust of triple the former speed…enough to wreck havoc with loose items or un-braced lightweight people. The “H” under the weather column at 1553 stand for haze but was really local dust, silt etc being lofted by the wind. The peak wind notes on the 1553 ob occurred at 1540 (2340 UTC) a detail I got from the undecoded ob:

What caused this blast?

As you can see on the surface chart below (valid at 4 pm, close to the time of the Skagway blast), there is a front cutting across SE AK (click on it for larger version). The front is moving north, and on the previous map (6 hrs earlier), it was drawn at Dixon Entrance (not yet in AK). Sure, fronts cause wind shifts and temperature changes, but looking at this chart and thinking June it is not obvious what was going on in upper Lynn Canal. Three things seem to not jive with the ground truth at Skagway. (That’s the fun of weather.) 1: The front is drawn as a occluded front, meaning the warmest air has been pushed aloft, and such fronts often have a subdued effect on the surface. 2: The front is drawn with a broken line, which indicates the analyst decided it was beginning to dissipate. 3. The front is drawn as barely past Sitka, about 100 miles (160 km) south of Skagway.

Here’s some factors I think bridge the seeming discrepancy. I think the front intensified and accelerated as is moved up SE AK, due to low air densities in northern SE. The analyst who drew in the fronts can hardly catch every detail when he or she has much more than just Alaska to worry about (the chart you and I see on the internet is drawn at the NWS HQ back east—our local offices draw their own or at least add their own detail.) It could be argued that this was a mesoscale effect and did not need to be drawn on the synoptic scale chart. That may be partly true, but looking at the buoys off the coast, one could track this front both with more speed and power than the map suggests. Here’s a graph of wind and pressure for the Cape Edgecumbe Buoy off Sitka: 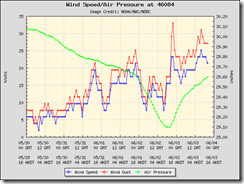 Remember, fronts are boundaries between air masses of differing densities (to keep it simple). Higher density air is going to tend to displace lower density air, push it back or up or both. This is pretty intuitive. Lower density air is air which is warmer, more humid, or under lower pressure, or some mix of the three. What happens when an air mass is moving and displacing less dense air ahead of it, and the air ahead of it is getting less and less dense? Just like an army who has broken through the heavily guarded battle front and finds little resistance behind it, it will accelerate. The warming of the land in the northern Panhandle and onshore into Canada created a region of low density air (for you pilot types the density altitude prior to the front was around 2200 ft (>600 m)).

I’d love to hear your thoughts (or direct experiences) on this situation, or at least what you thought of the write-up.

3 thoughts on “Skagway gets slammed”