Alaska is a big place, and the weather system affecting our state right now is even bigger, but I’m going to show you that is it the small scale that counts when it comes to winds of the south and southeast coasts. As I write this, virtually the whole state is under the influence of the strong pressure gradient between a large, deep low in the Northeast Pacific and strong but gradually weakening high pressure in Siberia and the Alaska interior. (The high was up to a crushing 1060 mb a few days ago, compared to the still hefty 1040 mb on this map) Here is the surface map from 3 pm/00z this afternoon from the GFS model (It’s the 12 hr forecast which is about as good as an analysis): 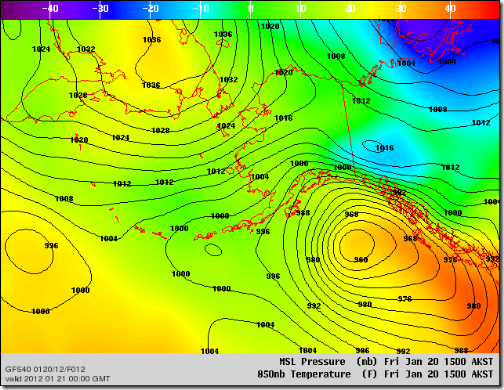 You probably know that where the isobars are drawn with the closest spacing is where the gradient is the strongest and therefore where the wind is supposed to be the strongest. So although most of the state should be somewhat windy, SE AK and on north to Cook Inlet should be especially so. Indeed, here is how the Inside Passage looked like at Haines this afternoon: 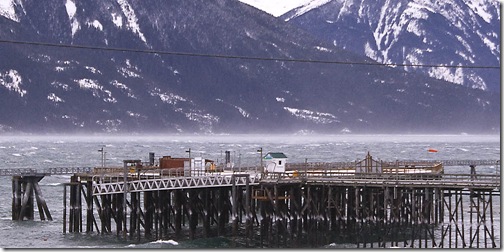 The interesting thing is that although this extremely large weather system looks fairly simple on the map—nice smooth isobars defining areas of greater and lesser pressure gradient and, presumably, wind strength—the terrain creates a detailed, small-scale patchwork of wind speeds and directions that even some meteorologists have had trouble believing at first. Let’s look closer at the above photo and situation. On the right end of the dock is a wind sock…stretched out horizontally (click on the photo for a larger view). No surprise, the wind was pretty strong there, perhaps 20-25 kts (knots…1 kt = 1.15 mph or .5 m/s) but less, maybe 10-15 kts where I was standing. But look out in the middle of Lynn Canal, or to be more precise, the far 1/3 of the Canal. See what looks like a thin layer of fog? It’s blowing spray…the winds out there are probably a steady 45-50 kts with gusts to 60 or 65 kts. This is not just an exaggerated guess. At the Skagway airport, about 13 miles north (to the left in the photo) the instruments were (and still are as I write this) reporting sustained 35 kts with gusts to 45-50. About the same distance to the south is Eldred Rock where the lighthouse winds are averaging 55 kts sustained, gusts to 70-81 as you can see from the graph below. The state ferry trying to make its rounds to Skagway and Haines today turned around half way and headed back to Juneau. 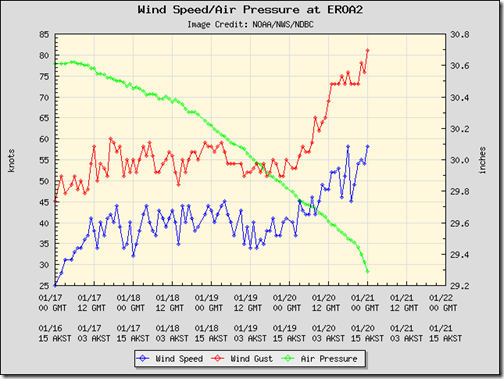 Link directly to the Eldred Pock page at NDBC

What’s at work here is channeling. When mountainous terrain has gaps, valleys or channels, which of course it usually does, the wind can flow through those channels to get to the other side, and that flow is often accelerated compared to what it would otherwise be. The wind “wants” to flow through these gaps when there is a difference in pressure between the two sides, which of course there usually is. Here are some rules about channeled winds:

Now look a the map of Lynn Canal:

You can see the extreme channeling leading to these extreme winds. 80 kts is not unusual for Eldred Rock (A on the map).

What about the direction? Look again at the surface pressure pattern, shown cropped and blown up below, Eldred Rock is at A, approximately. From which direction should the wind blow?

Most weather books for the layman, and even many more advanced textbooks would tell you something like this: “The wind blows counterclockwise around the low (N hemisphere) parallel or angled 20-30 degrees across the isobars toward the low.” With this instruction, the wind at “A” ought to be blowing from the east. In fact it is blowing from the north, about 340 degrees true. Many protest and say “the wind can’t circulate clockwise around the low!” Re-read points 3 and 4 in the channeled rules above and look again at the Google map. The channel is oriented right along 340-160 true…just a tad counterclockwise from north-south. Look at the pressure pattern. The pressure is definitely higher to the north, so the wind blows from north to south, right along the channel.

If it makes you feel better, the wind at “B”, the Fairweather buoy, is blowing from the east southeast, at 40 kts gusting to 50. Over the open ocean the coriolis effect is at play and the textbook answer works. Over highly blocking terrain, the coriolis effect is not at play because the air is initially not (hardly) moving, having been blocked by the mountains (it does not want to go over since the air is so stable…rule 1 above). When the air finds a gap or channel, it races through, more directly from high to low pressure. The coriolis effect does not have the time to “turn the wind to the right,” nor can the wind turn to the right since it is constrained in narrow channel of solid mountain! Don’t throw out the textbook, just add some notes in the margin. Few of them acknowledge this exception to the wind direction rules…maybe because most authors and publisher hail from the flatter east coast.

Skagway is in the same channel as Eldred Rock, but the speeds are a little less since the wind is coming off the land and the land has more friction than the water. In the summer, with predominately south winds, there is less difference in speed between Eldred Rock and Skagway. What about Haines? The wind at the Haines airport has been averaging about 5 knots during this event. Why? Look a the map. The Haines airport is a couple miles west of the dot labeled Haines. It’s in the Chilkat Valley, oriented more Northwest-Southeast than north-south Lynn Canal. In this case the isobars hardly cross it–they are pretty much parallel to the channel, so there is little difference in pressure from one end to the other. See rules 4 and 5 above. [If the low were farther east, say over Ketchikan or BC, The wind would blow faster down the Chilkat Valley, and when this happens it often looks on the large scale map like the wind is blowing exactly clockwise around the low, 180 degrees from the textbook solution!] Certainly other parts of Haines, downtown in particular, have more wind than the airport in the current situation, because of their exposure to the edge of the Lynn Canal wind or a wind coming down a smaller side channel. Also, occasional bursts of wind spill over the ridge along the north side of the valley, violating rule 3 above. No absolutes in the weather business.

Now, if the previous material makes any sense at all, get ready for an even more tricky and interesting case. Look up the coast at location “C” on the surface pressure map. The flatlander textbooks would say the wind should be from the northeast, right? Well, by now you know it can’t be right, but you will probably be surprised by this map: 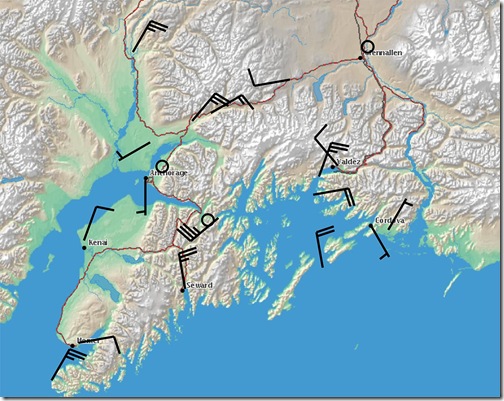 Do the wind speeds and directions look almost random to you? [don’t know how to read the wind symbols? Think of them as arrows, with the point placed on the weather station, the shaft aligned with the wind direction (with the arrow pointing with the wind), and the fletching (called barbs) showing the wind speed: 10 knots for each full barb and 5 knots for each 1/2 barb. Look at Talkeetna for example, the station furthest NW on this map. The wind there is from the north-northeast at 25 knots.] These wind reports are real and they are from the same time as the pressure map above. If you look closely, you will see that almost all the stations with the strongest winds are in, or just at the exit of, a pass, gap or other sort of terrain channel. Most of those have north or northeast wind since those channels will interact best with the large scale pressure pattern as shown on the pressure map above.

The standout exception is Whittier, which has 35 kts from the southwest. Whittier is at location “C” on the pressure map, and it looks like it is not only violating the textbook wind rules but also my channeled wind rules too! What you need to know is that this particular pressure map is too general and smooth to handle this case (other models are more detailed and do show some of these small scale effects). The pressure patterns are affected by the terrain, which in turn gives rise to more possibilities for crazy looking wind directions. In this case the wind is blocked by the substantial barrier of the Kenai and Chugach Mountains and this blockage builds up the air on the west and north sides, the upwind side. This is the higher pressure side to begin with, but the blocking increases the pressure difference, setting up a situation for accelerated gap winds. This damming effect also allows the high pressure to “bend” around the obstacle. For instance, from the pressure map you might conclude that the pressure at Kenai should be about the same as at Whittier, when, in fact, it is a fair amount higher. This bending allows almost any break or gap to be an outlet to the pressurized air, no matter the direction. So the wind at Whittier blows from the southwest whenever there is a low pressure area to the east, southeast or even a fair ways into the south quadrant. Notice the small circle just to the west of Whittier? That is Portage Glacier Visitor Center, a weather station only 9 miles from Whittier as the crow flies, yet so different weatherwise. The wind there is calm. Remember rule 6. There are several other examples of this and the other rules on this map. Can you spot them?

I’d love to hear your questions, comments, etc on this, or other Alaska Weather topics. Click the comments link.