The simple answer: It’s the elevation above which any precipitation is expected to be snow, and below which, rain.

But maybe what you really wanted to know is…

How can I determine the snow level?

First let’s talk about a more precise term, the freezing level. It is the elevation where the temperature of the air is zero Celsius (32 Fahrenheit…but Celsius is so much easier when dealing with freezing level and such). It’s not quite as simple as it sounds, though…here are several situations to consider:

In a single above-surface freezing level situation, the snow level will be a certain distance below the freezing level. This distance varies but the rule of thumb is 1,000ft (~300 meters) below the freezing level. This is because as the snow falls into above-freezing air, it does not melt immediately. This is obvious from those times that it is snowing at ground level while the temperature is a bit above freezing, in rare cases by 5 or 6 Celsius degrees (~10 Fahrenheit degrees). Two things come into play. One is that it simply takes some time for the flakes to melt. Another is that melting snow absorbs a lot of heat and cools the air, slowing the melting process. [see my comment update below]

How can I find the current snow level?

Unless you want to carry a thermometer aloft on foot or in an aircraft, you can take advantage of the global 3D weather observing system perfected over the past 70 years or so, and now available to anyone with Internet access. Weather balloons are still the backbone of the system, and you could find the exact freezing level(s) where and when the balloon soundings are taken. This data is ingested into the massive computer models, which not only provide a interpolation of the current freezing level for any location, but then project all weather parameters, including freezing level, into the future. Here’s a map from the Alaska Aviation Weather Unit giving the current day’s freezing levels:

You will notice most of the state—almost everything north of the red line—is in situation #1 above, SFC (surface) freezing level. In the Aleutians, the freezing level ranges up to around 5,000 ft (020 means 2,000 ft in aviation speak). In Southeast Alaska it ranges from 2,000 to almost 4,000 ft, but notice how the surface line crosses the green line and runs down eastern part of the panhandle. This is indicating multiple freezing levels…in some places (within the area between the SFC line and the 020 line) the surface is below freezing but there is above-freezing air aloft .

You can find the current version at http://aawu.arh.noaa.gov/index.php?tab=1

How can I know what the snow level will be in the future?

This map from the Alaska Weather TV show gives the next day’s freezing level (but be sure to check the time since the maps are only produced once per day in the afternoon. 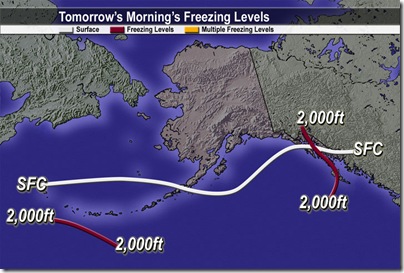 You can find the current version at http://pafc.arh.noaa.gov/tvwx.php. Look under the aviation maps drop down.

If you want to move beyond this simple chart, you can find more detail and longer reach forecasts by looking at the model graphics. Most show lower atmosphere temperature trends, which can be used to surmise changes in the freezing and snow levels, but some include actual freezing level maps. There are also precipitation type maps which show whether rain or snow, or freezing precipitation is forecast. Visit this UAF site and scroll down near the bottom for freezing level maps. Look for “precipitation category” for rain vs snow, and if you know how to read a sounding plot, you can also see forecast soundings for four stations under “Skew-T/Log-P.”

Can I estimate the freezing level or snow level from the surface temperature?

Yes, but with plenty of caveats. What is needed is to know how fast the temperature decreases with height (a weather element called the lapse rate). The bad news is that the lapse rate is a) not always constant, and b) not always even lapsing (in the case of an inversion–warming with height). The good news is that we can usually spot those situations where there are probably inversions or otherwise tricky temperature profiles. In most situations where you are dealing with a large scale weather system bringing wind and rain or snow, the atmosphere becomes more homogeneous, rather than layered. It is said to be well mixed. This is more often true on the coast and less often true where mountains block the low level flow from the storms, such as most of inland Alaska. If clear high pressure weather is in place, this method is likely to fail. Caveats done for now, the lapse rate in the mixed situations tends to be about 3.5 degrees F per 1,000 ft, or 6.5 degrees C per 1,000 m. Simply figure how many feet or meters needed to reduce the surface temperature to the freezing point. The snow level will be about 1,000 ft or 300 meters below that. Any error is most likely to be on the low side, since the lapse rate is not usually greater than the figures given, but often less. However if there are lots of cumulus buildups then you have an unstable situation and the lapse rate is probably greater, meaning the freezing level may be lower than calculated. In this case the snow level may be lower yet, since showery type precipitation tends to be more vigorous, with a downdraft to push snow flakes and cool air to a lower level.

Is the snow level ever so high that there is, for practical purposes, no snow level?

Not in Alaska. Virtually all precipitation that falls outside the tropics starts out as snow. Rain is simply snow that melted before reaching the ground. So the freezing level really would be better called the melting level. The one significant exception is drizzle, which can form and fall from shallow, above-freezing stratus clouds.

I hope I answered more questions than I raised, but just in case, the comments feature (link below) is a good place to ask for clarification, or add your own ideas or experiences with snow levels, freezing levels or anything weather.

2 thoughts on “What’s the Snow Level?”