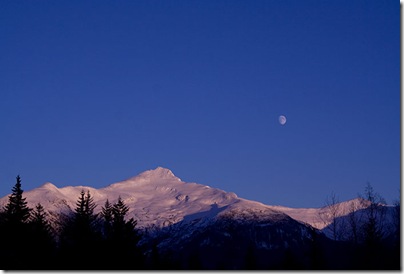 While I find clouds fascinating, there is nothing like the clear blue sky, and when the sky is clear in Alaska, and especially Southeast Alaska, it is very clear and very blue thanks to the clean air. This photo was taken on the 17th from Haines looking across Lynn Canal at Santa Claus Mt. (can you spot Santa lying down with his feet to the left and his head as the summit? Click on photo for a larger version)

Much of Alaska has been seeing blue over the last couple of weeks. An upper level ridge over the Bering Sea has kept the active, transitory storms to the far west. I added “transitory” because we are not without active weather, it is just active and static. There has been a strong low in the Northeast Pacific for at least two weeks with strong offshore flow almost uninterrupted for the southeast and south coast. Here’s three representative surface maps, from Dec 6, 13 and 18.

In between those dates the low has looped north close to Prince William Sound and been fortified by absorbing other lows, but essentially it is the same low, powered by the contrast between the relatively warm water of the North Pacific and the cold air coming over the upper level ridge and off the cold land mass of Alaska.

While this pattern has opened up the skies, especially clearing out cloudy Southeast, it comes at a cost. It’s been brutally cold in the interior: –60F/–51C this morning in Fort Yukon and plenty of sub –40F/C lows around the interior. Coast dwellers don’t get that cold, but we have similar downward deviations from the “normal” temperatures and often lots of wind. Who’s got it worse? This is one reason I’ve never thought of Alaska as a stargazer’s paradise. When we have the clear weather its either too light (summer) or awfully cold (winter). Autumn tends to be quite cloudy, although sometimes we get a lucky string of nice weather, as we did this September. We also had some breaks this August at a perfect time to see the Perseids meteor shower. There are some serious astronomy buffs up here though who don’t want to hear this negative talk. There are even some in Juneau, and they have made the best of it, in part by operating the Marie Drake planetarium. The Planetarium, opened back in 1968, features a 30 foot domed ceiling and a powerful projector. (If you are an Alaskan, you know that Marie Drake wrote the words to the Alaska Flag song, which begins, “Eight stars of gold” and features the Big Dipper and the North Star.)

Lunar eclipse on the 20th perfect for Alaska viewers 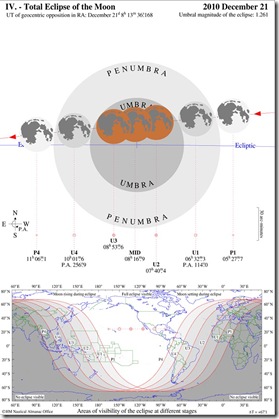 So, to be more upbeat, there are some wonderful astronomical sights to be seen in the northern skies (not to mention the aurora borealis). One of them will be the total lunar eclipse this coming Monday night, Dec 20th (Alaska Time). Alaska (and all of North America) is on the best part of the globe for viewing this eclipse. The moon will be well up in the sky, clear of the mountains, and you don’t have to stay up super late. The first part of the eclipse (penumbral) starts at about 8:30 pm AST, gradual darkening the disk with a copper coloration. At the about 9:30 pm AST the umbral phase begins, and the disk will darken more dramatically, first a bite from the side, then the whole disk or totality. The total phase lasts over an hour from 10:40 to 11:54 pm, then the reverse sequence occurs. To add to the spectacle, the moon will be just above the wonderful winter constellation Orion. And to be even more upbeat, the weather looks like it should be pretty clear for much of Alaska. Check the latest forecast for your area, and don’t forget to bundle up well.