With the rapidly lengthening daylight during the Alaskan spring comes much welcomed warmer weather. Also increasing is the daily temperature range, the spread between the afternoon high and the early hours low. This diurnal effect is easy to spot in spring and fall when there are enough hours of both daytime heating by the sun and nighttime cooling by radiation (the ground’s heat being dissipated in the form of infrared radiation.) In winter, there is little warming by the sun in most of Alaska, so other factors affecting temperature take over (see http://www.williwaw.com/2009-11-28/diurnal-temperature-patterns-in-winter/). Click on the graph below for a larger version that should open in a separate tab or window and I’ll describe a bit of the interesting information that can be harvested from this real life example from Nenana, home of the famous ice classic. 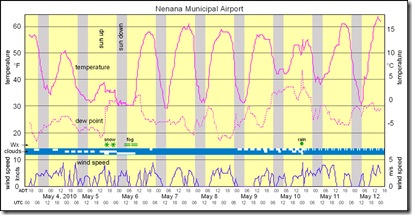 Nenana is a small town almost in the center of Alaska (about a hour’s drive south of Fairbanks), and so has a continental climate: very cold in winter, quite warm in the summer and fairly dry all year. The top line on the graph shows the temperature as reported hourly by the automated weather station at Nenana’s airport. Below that are dew point, weather occurrences, cloud cover, and wind speed, all of which bear on the diurnal effect. The critical sun influence is charted here in the vertical colored bars: yellow represents the time of the day the sun is up and grey when the sun is down. By May the grey bars have become quite small indeed. The date and time is along the bottom, in both Alaska Daylight Time (ADT) and Universal Time (UTC), also called “Z” time as in 0600Z=2200 (10 pm) ADT.

Radiation is the driver for diurnal temperature patterns

As a quick review, solar radiation warms the earth when the sun is up, while terrestrial radiation attempts to cool it not only at night, but continuously. Our atmosphere interferes with this radiation exchange. With no atmosphere, the moon undergoes a huge diurnal temperature swing, over 450°F (250°C) between high and low (here on earth we measure the temperature of the air, but since the moon has no air, this is the temperature of the ground). Clouds effectively block radiation from the sun and the earth. Moist air hinders the terrestrial radiation, although to a lesser degree than clouds. Wind does not affect radiation but does mix surface air (where the strongest radiational effects are taking place), with more moderate layers of air above, reducing diurnal range.

Getting back to the graph, you can see all these forces at work. From the left side of the graph, late on May 3rd through May 5th, a weather system is moving into the area. The clouds are increasing and lowering (see the white symbols against the blue band). The diurnal range is getting smaller each day. Snow starts falling in the afternoon of the 5th and there is a corresponding drop in temperature and increase in the dew point (meaning the humidity is greater). The wind varies from brief calms to 10 knots (5 m/s), not too strong but typical for the interior. The snow does not last long and the clouds begin to break and lift. As this happens, the temperature begins another drop (this time due to radiational cooling—the sun is setting—vs the snow-induced cooling a few hours prior) but is stopped abruptly by the formation of fog (note that the temperature and dew point are the same…the relative humidity is 100%). Fog does this not only by blocking further radiational cooling but by releasing the latent heat that was once stored in the motion of the water vapor molecules. The Nenana airport was socked in with fog most of the night and on into the morning. Winds were calm most of the time, but in the middle of the night a 3-4 knots (2 m/s) breeze did briefly improve the visibility from around a half mile to 5 miles (1-3 km).

The sun always wins in the end

Fog after snow is straight out of the forecasting 101 textbook. As you may guess the textbooks don’t always cover Alaska’s situations very well, but Nenana in spring is not so different from many places in the lower 48 states, thanks mainly to the balance of sun and night as mentioned above. So about 10 am on May 6th, after the night of fog, the sun banished the fog and low clouds, beginning 3 days of clear weather. The 6th through the 8th and on into the 9th of May is a great example of an undisturbed diurnal temperature pattern…about as good of one you are likely to find in Alaska, I would guess. Notice how shortly after sunrise the temperature begins a steady climb, going from around freezing (32 °F or 0 °C) to around 60 °F (15 °C) by late afternoon, before falling at least as quickly in the evening and night. The cooling begins quite a while before sunset because the radiational cooling effect is going on all the time, and becomes stronger than the heating of the sun (the sun is at a low angle by then). Notice also how the wind speed pretty much follows the temperature curve. On May 10th another weak weather system moves into the area and again, the diurnal range shrinks as the clouds and moisture and wind increase. After a brief rain, things break up again (no fog this time) and the diurnal pattern strengthens. Spring continues to burst forth.